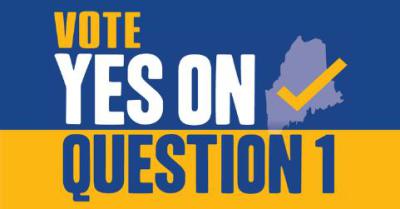 ...But There's Still More Work to Do

We did it! We won at the ballot box last November. The new Clean Election Act is in force.

Mainers object to the growing role of big money in politics. We believe government should be accountable to everyday voters, not just to wealthy campaign donors.

The new law took effect on December 23, 2015, and more candidates from both parties have signed up to use the new system in 2016.

Even though the 2015 referendum passed with flying colors, that wasn't the end of the story. The new law called for a transfer of $3 million into the Clean Elections Fund on January 1, 2016. At first, it seemed that Governor LePage would not make that scheduled transfer, but in the end -- and a few weeks late -- the money did come through. Thanks to the League volunteers who helped advocate for that full transfer under law. It now appears that funding will be adequate for 2016.

And candidate participation in Clean Elections in Maine House and Senate races is up to 62% for the 2016 election. That is almost 10% higher than was the case under the crippled law in 2014.

However, past raids from the Clean Elections fund, including one as recently as 2014, mean that there is still a risk of insufficient funds for 2018 and beyond. While it is frustrating to see legislator and the Governor ignore the clear will of the voters, we are reminded that democracy is something we practice; and we must continue to bring the voices of citizens to our lawmakers for a strong public funding system.

This country was founded on the ideal of one person, one vote. At the League, we are part of a long tradition spanning almost two centuries of work to realize that ideal, from the elimination of property qualifications for white men, through the abolition of suffrage qualifications based on race, to granting women the right to vote, outlawing poll taxes and literacy tests, and finally extending the franchise to anyone old enough to serve in our armed forces.

Alas, almost one hundred years after the founding of the League of Women Voters, and despite so much progress, the inclusive democracy for which we work still faces very serious 21st century challenges, from gerrymandering to new voting restrictions. None of these threats to the ideal of political equality is more serious that the threat of big money in politics.

Although we each get one vote -- and some of us have a hard time hanging on to that -- we are not all represented with the same vigor.

When big-money donors spend in political campaigns, they create a feedback loop in public policy that further advances their own interests, deepening the political and economic chasm between themselves and ordinary people. Mainers have rejected this type of influence in the past by enacting the Clean Elections Act, and we're eager to do it again now.

The League's History with Clean Elections

The League of Women Voters was a founding member of the coalition that worked to gather signatures to pass the Maine Clean Election Act in 1996.

Since it went into effect in 2000, the Clean Elections Act has allowed good people from diverse backgrounds to run for office; kept candidates focused on voters, not donors; and allowed legislators to serve in office without strings to big money.

Before Court and Legislative actions damaged the Act, 85% of Maine lawmakers used Clean Elections to fund their races. That included Democrats, Republicans, Greens, and independents. And Clean Elections has allowed Maine to have more working class people serve in the legislature than in any other legislature in the country.

While it has been discouraging to see this successful program diminished, it is very exciting to see Maine people stand up for the future of Clean Elections by collecting signatures and getting their friends and neighbors involved. The Clean Elections Initiative is our best chance to restore, strengthen, and ensure the success of Clean Elections for the next generation of Mainers. It starts with all of us taking action now.

Official word from the Secretary of State, February 17, 2015.

Maine Voices: Time for Mainers to push back against big-money dominance of elections, celebrating passage of the 19th Amendment on August 26, 1920, LWVME's Jill Ward renews the call for political equality in the 21st century, Portland Press Herald, August 27, 2014.

Visit Maine Citizens for Clean Elections to learn more about money in politics.