We support the use of the National Popular Vote Interstate Compact (NPV) as one acceptable way to achieve the goal of the direct popular vote for election of the president until the abolition of the Electoral College is accomplished.

NPV is nonpartisan. NPV favors voters, not parties, land, geography, factions, or states. NPV works within the constitution, and does not change or abolish the Electoral College. 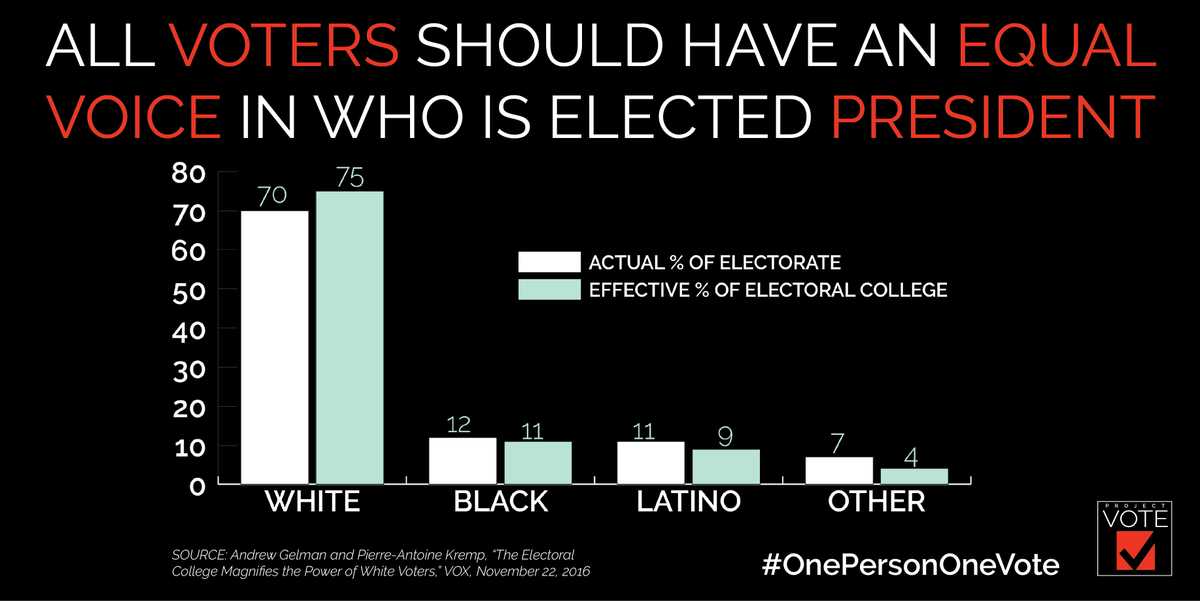 How We Elect a President Now

On Election Day (or before!), you and I  cast our ballots for the candidate of our choice, but the real vote is when 538 electors meet on a constitutionally determined day in December and cast their ballots. Those are the intermediaries who make up the Electoral College. Who chooses them?
Article II, Section I of the US Constitution gives states the sole authority to determine the manner by which it chooses its Electors.

“Each State shall appoint, in such Manner as the Legislature thereof may direct, a Number of Electors, equal to the whole Number of Senators and Representatives to which the State may be entitled in the Congress .”

Forty-eight state legislatures passed laws to choose its electors by  “winner take all." The candidate who wins the most votes gets all of the state’s electoral votes, whether the candidate wins by 100,000 votes or 1 vote.

Since the Maine state legislature changed to the district method in 1972:

Over 2 million votes cast for the Republican candidate between 1988 and 2020 yielded 2 Electoral College votes.

With winner take all, whether state-wide or at the district level, voters who did not vote for the majority winner had their votes effectively given to that candidate. Those voices and votes were muffled.

States joining the NPV agree to award their electors to the winner of the national popular vote. State legislatures pass the NPV legislation, and can also pass legislation in the future to leave the agreement  (except during a 6 month window before Inauguration Day).

NPV becomes effective when states representing 270 Electoral College votes sign on to the agreement. Maryland was the first state to join in 2007. Most recently, Delaware, NM, and Oregon joined in 2019. 15 states and DC have joined. 195 votes have been secured. 75 to go!

When NPV goes into effect, each state will continue to conduct its elections and report results, just as they do today. States in the NPV interstate compact will cast their cumulative 270 (or more) electoral votes for the national popular vote winner, who will become president.

NPV Resolves 4 Defects of the Winner Take All Method of Electing the President: 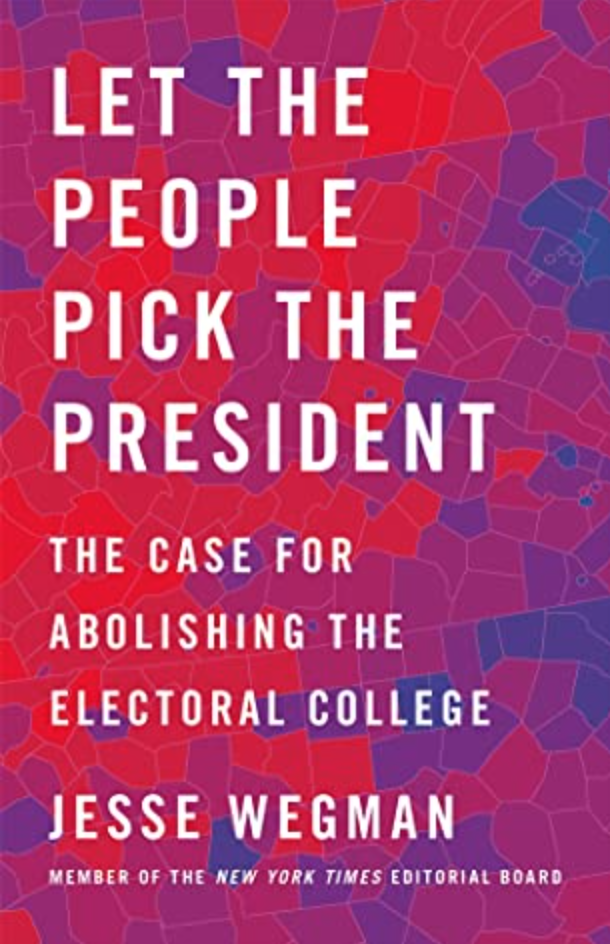 Let the People Pick the President: The Case for Abolishing the Electoral College

The framers of the Constitution battled over it. Lawmakers have tried to amend or abolish it more than 700 times. To this day, millions of voters, and even members of Congress, misunderstand how it works. It deepens our national divide and distorts the core democratic principles of political equality and majority rule. How can we tolerate the Electoral College when every vote does not count the same, and the candidate who gets the most votes can lose?

Want to read Let the People Pick the President for your next book club? Check out our book discussion facilitation guide.

Big cities, such as Los Angeles, would control a nationwide popular vote for President. FALSE!

Under National Popular Vote, every vote will be equal throughout the US. A vote cast in a big city would be no more (or less) valuable or controlling than a vote cast anywhere else. Want to see the long answer?

Maine, with only 4 electoral votes, would be disadvantaged by the National Popular Vote. FALSE!

The small states (the 13 states with only three or four electoral votes) are the most disadvantaged and ignored group of states under the current state-by-state winner-take-all method of awarding electoral votes; NOT because of their low population, but because they are not closely divided battleground states. Want to see the long answer?

The Electoral College would be abolished by the National Popular Vote compact. FALSE!

The framers created the Electoral College to protect the small states. FALSE!

The primary division was between pro-slavery and anti-slavery states, not big and small states or cities versus rural (all the states were rural in 1787). Slave states had large populations but far fewer eligible voters (slaves could not vote). Want to see the long answer?

Maine will give up an advantage under NPV, because our Electoral College vote to population ratio is high. FALSE!

Maine is non-competitive and has no advantage. Swing states get the majority of campaign visits and spending (99% of the 2016 campaign was in the battleground states), enjoy almost 8% more in federal funds, and are 2x more likely to get presidential disaster declarations than noncompetitive states. Maine gets none of this. But NH does because it has a similar population, same Electoral votes, but it's a swing state. Want to see the long answer?

It will be too hard to conduct a national recount in a very close election. FALSE!

States will continue to manage their vote count and recount; recounts occur in the state or states that are close. Recounting votes cast for President in the nation’s 186,000 precincts is not a logistical impossibility, as evidenced by the fact that the original count is not a logistical impossibility—far from it. States consistently count the vote accurately the first time around, and have recount procedures in place, if needed. And the need is rare.

Quite the contrary! Battleground states, where campaigns fight for every vote and every vote matters, have significantly higher voter turnout than “spectator” states.

This is the way the founders wanted it to be. FALSE!

Nothing about our current electoral system is like what the Founders envisioned. The Founders wanted the legislature to select electors, or candidates, who would be the "most enlightened and respectable citizens." There would be no input from the people, or citizens.

But by 1836, all the states were using a statewide “winner take all” system to choose their electors, a system never advocated or envisioned by the founders. Instead of being a deliberative body, the Electoral College in practice was (and is) composed of presidential electors who voted in lockstep to rubber stamp the choices that were made by the nominating caucuses of the political parties.

If Americans want to select a president the way the Founders envisioned, we’d need to give up the statewide popular vote, and return to the days when the legislature selected the electors without input from the people. Or, we can abolish the Electoral College, and while undertaking that long process, join the NPV interstate compact and direct Maine’s electors to cast their votes for the winner of the National Popular Vote. Want to see the long answer?

The state-by-state winner-take-all rule prevents tyranny of the majority. FALSE!

Winner-take-all statutes enable a mere plurality of voters in each state to control 100% of a state’s electoral vote, thereby extinguishing the voice of the remainder of the state’s voters. The state-by-state winner-take-all rule does not prevent a “tyranny of the majority” but instead is an example of it. And, it’s impossible to discern any threat of “tyranny of the majority” that was posed by the 1st place candidates in the 5 elections in which the Electoral College elected the 2nd place candidate to the presidency. Want to see the long answer?'

A national popular vote would be mob rule. FALSE!

California and New York will dominate the election. FALSE!
Not true! In fact, the "winner take all" method distorts the weight of voters in all states, including the big states like New York and California, silencing the votes of the minority while magnifying the votes of the majority winner. Want to see the long answer?

With your help, we're going to get the National Popular Vote Compact signed into law. There are many ways you can get involved:

You can select all of the ways you want to help out, and we will be in touch to share more details and help you get started! Click here to fill out our interest form.